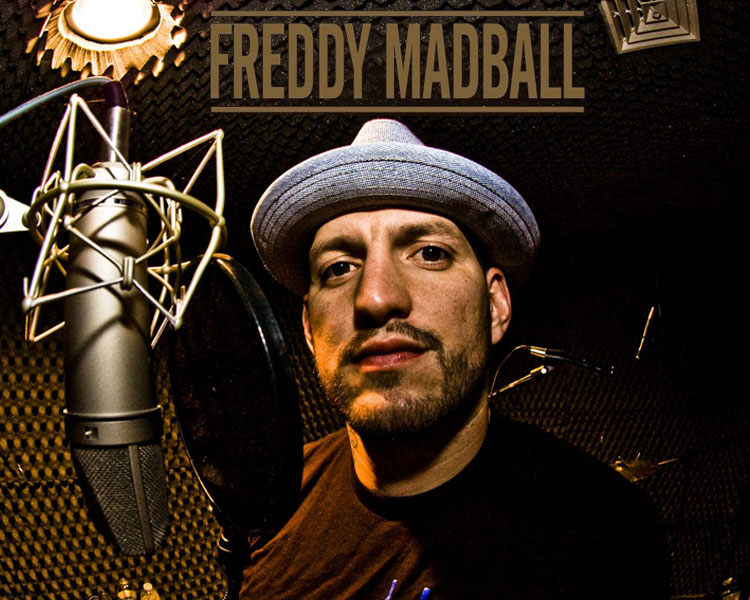 When one thinks of legendary New York Hardcore veteran and Madball vocalist Freddy Madball, most likely the first images that fall into focus involve mosh-pits, stage-diving and brutal screaming. But much like every other driven artist, there is more lurking underneath Freddy’s creative persona than one might realize. For example, although as a youngster Freddy was introduced to hardcore by his ol

der brother and Agnostic Front mouthpiece Roger Miret, he also grew up with just as much love for hip-hop, which has carried through to this very day.“I grew up in a house that was musically diverse,” Freddy explains. “While obviously hardcore played a big role in my life and allowed me the opportunity to actually take part in music from performing aspect, I was also raised as a fan of an eclectic mix of sounds—anything from rock to Latin music, etc.. But one of my most memorable musical experiences was purchasing The Show by Doug E. Fresh and the Get Fresh Crew featuring Slick Rick. I’ve loved hip-hop as far back as I can remember.”That very memory bumping “The Show” and “La-Di-Da-Di” in his bedroom, in fact, has kept Freddy glued to hip-hop ever since his grade school years, and the result of his longtime passion has finally culminated in his first full-on foray into the world of spitting lyrics as an MC. Alongside his trusty and multi-talented producing partner D.J. Stress, Freddy and Stress have started to make quite the buzz for themselves after a high-profile debut show in England, several upcoming U.S. shows in the works, not to mention some hypnotic, head-nodding tracks available via the duo’s website, which are merely the tip of the iceberg from their recent time in the studio.

Yet even though the tantalizing results of what these two have crafted thus far are impressive, this project has been a long time in the making.

“I’ve been talking about doing a hip-hop project since the mid-nineties,” Freddy says. “I went through some rough times in my personal life and my touring and recording time with Madball and Hazen Street, two bands I am still very much involved with, have always made it difficult to find the time to get things going.”

After several years of patience, however, Freddy met D.J. Stress, who provided a level of inspiration and enthusiasm that Freddy needed to get his ideas framed in the proper setting.

“When I met Stress, I was blown away by the amount of beats he had ready to show me,” Freddy reminisces with a laugh. “Stress came with about 40 or 50, most of which really blew me away.”

Stress’ beats are a combination of his hometown Philly sound mixed with a New York vibe blended with a variety of other influences, and they provide the creative spark for Freddy to nail down his highly personal, real and reflective lyrics in finalized form—the result of which have attracted the attention of a slew of figures in the underground hip-hop scene.

Of course, based on the track record Freddy has established for his other artistic ventures, one should not be surprised that his work with D.J. Stress is so well-crafted. But folks should also be aware that this project is no flash-in-the-pan.

“I’ve been into hip-hop as long as a lot of these younger MCs have been alive, and I’m only in my early-thirties,” Freddy proudly states. “Now I’m not saying that makes me better than anyone else, but people need to know that hip-hop culture is an important part of who I am.”

As with any person who has spent a few years immersed in this style of music, Freddy is also concerned with the direction the genre has headed the past few years. Freddy claims a wide variety of influences – anything from Rakim and Public Enemy to KRS-One, N.W.A. and The Notorious B.I.G. …And he vows not to make his venture into the rap game an overtly materialistic one.

“Now I’m not dissing anyone for being successful at what they do,” Freddy says. “I enjoy the finer things in life like anyone else, but if cars, jewelry and champagne are the only subjects you rhyme about then I have to question the integrity of where this is all going. I think there are so many unique stories that all of us MCs have to share from our lives. I’d love to see people get a bit more personal and real, which reflects who I am.”

Anyone familiar with Freddy’s life and musical experiences couldn’t imagine him doing it any other way……..